Female Stereotypes in ‘Doctor Who’ and Finance

The new ‘Doctor Who’ was unveiled recently, and, lo and behold, the new Doctor is a woman. Many of us could be forgiven for wondering why, after more than 50 years of the show and 13 Doctors, it’s only now that we’re seeing a woman in the role. There has been much progress in equality for women, especially in education, but as a financial planner I have seen little change in the number of women choosing similar careers to my own.

How many female role models spring to mind when we think of famous, successful investors? It’s an unfortunate truth that there are not many. Few women work in finance. I often go to conferences and find myself among a very small minority. But this certainly isn’t because women are less capable than men when it comes to money.

Even as consumers, women are considered a niche market to be cornered rather than being addressed as part of the mainstream. How often, in money or insurance, do we see the all-pink, Thelma and Louise-themed, women-only marketing strategies? I understand these businesses are trying to reach out to an under-served sector but they’re confirming the cliché when instead they should be breaking away from limiting stereotypes.

Budgeting and Business: Women Do It All

One of the most damaging stereotypes is that women are too indecisive or emotional to be in charge of the purse strings. This couldn’t be further from the truth. We only have to look at our own households, where the majority of decisions about money are made by women, to find the evidence. UK statistics show that among couples, women are more likely to manage budgeting and saving. They organise the family finances and are key decision-makers when it comes to future planning.

It’s not just the family budget and household finances where women are challenging biases. Another report explains how women-owned businesses can provide powerful and successful models for other businesses. The statistics that show that women are starting up their own enterprises are also encouraging. Just under half (45%) of all SMEs are now majority or equally-led by women.

Take Debbie Wosskow and Anna Jones for example. Their company supports female-led businesses through a unique education and funding network called AllBright. Founded by two entrepreneurial female CEOs, they demonstrate the powerful potential in women that is often overlooked in the finance sector.

There’s compelling evidence that women actually make better investors than men. One of the most respected studies into gender differences in investing suggested that men are more impulsive, overconfident and likely to take a short-term investment approach. If there is one thing that I’ve learned in my years as a professional wealth planner, it’s that the biggest risk to your portfolio is failing to stay invested – success is often simply the ability to stay invested for longer. Women often have a more holistic approach to investments that will reap long-term benefits, as opposed to short-term return.

In the home, in business, and in financial planning there are plenty of examples to show that women are just as able as men when it comes to managing money. By continuing to break down barriers and reach the potential in our roles, we will create a stronger financial industry. With Jodie Whittaker playing the next Doctor Who, my hope is that we’ll wonder why in all of time and space it took us so long to accept a woman in the role.

This article does not constitute financial advice. Individuals must not rely on this information to make a financial or investment decision. Before making any decision, we recommend you consult your financial planner to take into account your particular investment objectives, financial situation and individual needs. Past performance is not a guide to future performance. The value of an investment and the income from it may go down as well as up and investors may not get back the amount originally invested. This document may include forward-looking statements that are based upon our current opinions, expectations and projections. 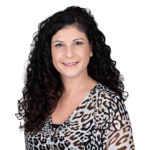 Emily joined the company in October 2012 and has over 20 years’ experience in financial services.