The women redefining the tech industry 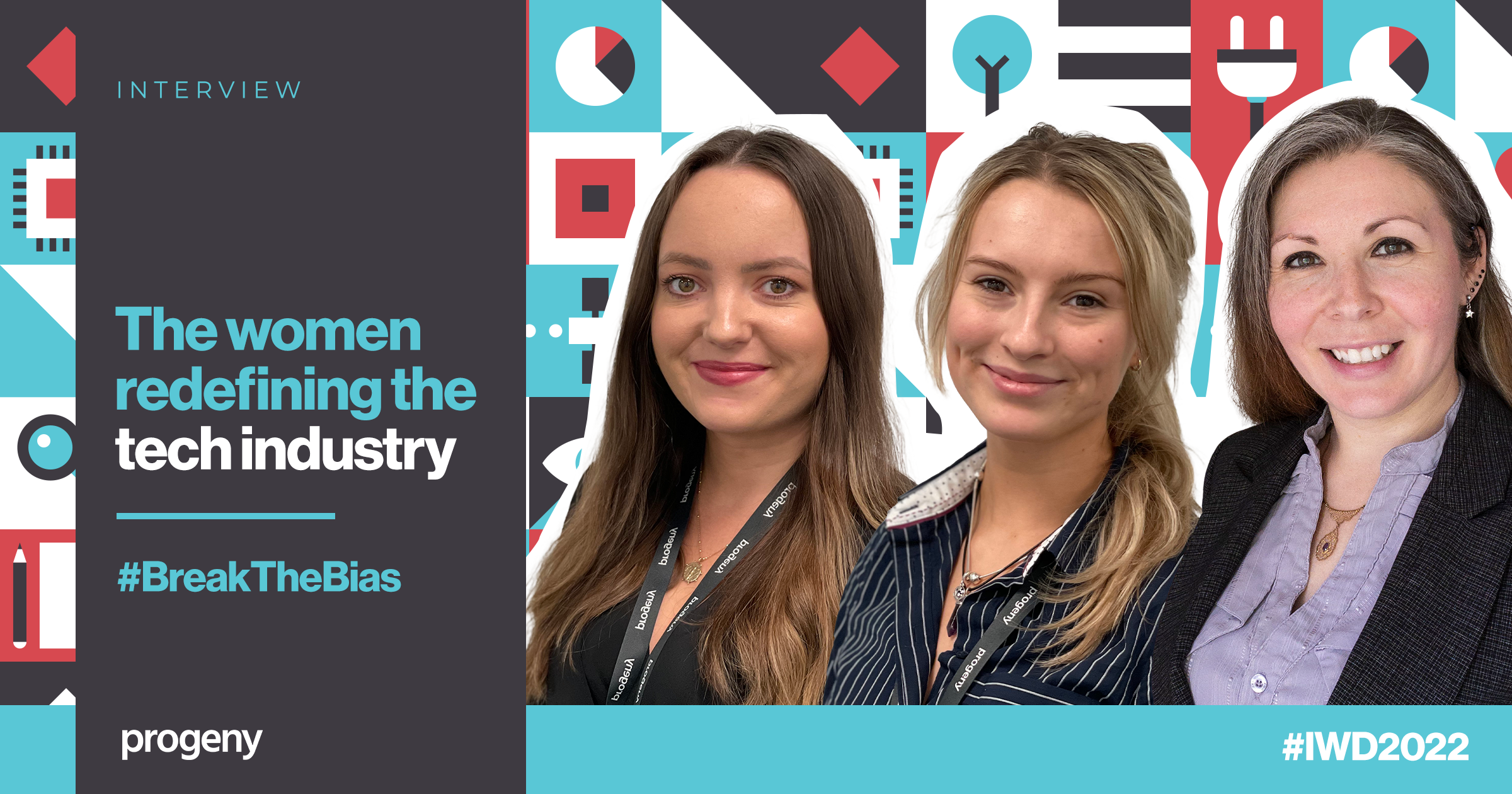 Resolving the imbalance of gender diversity and equality in the workplace has been a keen focus for many industries over the past few years, yet women still remain under-represented in STEM (Science, Technology, Engineering and Mathematics) sectors. We spoke to three women working in Progeny’s Technology team for their insight into what it’s like being a woman in tech, why they feel there is a lack of women in this area, and what we can do to fix the gender gap.

Can you share a little bit about your role and what a typical day for you is like?

Susan Mould: I’m the IT Operations Manager and in my role my days can vary wildly. They’re usually a mix of supporting the various applications and software across Progeny and ongoing project work.

“I hope I can show the next generation of tech women that it is only a ‘man’s world’ if we don’t get involved.”

Sally Shepherd: I’m a Data Analyst in the Innovation and Data team at Progeny. My job is to develop and implement data analysis from numerous data sources across the business, using different statistical techniques and programmes. No day is ever the same which is why I enjoy it so much! The aim is always to make the data easy to understand and present it in such a way that allows us to make meaningful conclusions and successfully adapt processes within the business. Progeny aims to be a data-driven business, so everything I do has the potential to make an impact on the wider company, and this is always in the back of my mind.

What do you think is the best part of being a woman in the tech industry? What motivates you?

JM: I enjoy bringing my own unique perspective to the role. I think it’s incredibly important for a workplace to be diverse and to have varied representation in leadership roles. I’m motivated by career progression – I enjoy upskilling and pushing myself out of my comfort zone.

SS: My favourite part of being a woman in the tech industry is knowing that you are part of a greater movement, and that you could potentially be empowering young women. I was lucky that I have amazing parents who raised me in the exact same way they raised my brothers. I was always encouraged to think bigger, aim higher, and not to let anything (especially my gender) stop me from pursuing my goals. I hope I can show the next generation of tech women that it is only a ‘man’s world’ if we don’t get involved.

I am motivated by the amazing women around me who have had such successful careers so far. It’s wonderful to see other women who have been on a very similar path doing so well and I cannot help but be motivated by their success!

“According to Eurostat, just 17% of the people working in STEM roles across Europe are female”

SM: I think given the fewer numbers of women in tech, when we do meet one another, we’re MUCH more inclined to be friendly and supportive and forge our own little communities. I’m really appreciative of my team. They’re all a bit nerdy and, given that I had an unconventional entry to the industry, are patient and helpful when gaps in my knowledge make themselves known.

Do you notice a lack of women in technology?

SS: I do notice a lack of women in technology – I am one of few women on my computer science course. According to a report by Leftronic, the UK alone we will create 100,000 new tech jobs annually, but only 14% of those jobs will be taken by women. In the tech industry, women are still earning 29% less than their male colleagues. For a very forward-thinking industry that is the future of our world, these stats are concerning.

JM: Yes I do, according to Eurostat, just 17% of the people working in STEM roles across Europe are female, and only 5% of leadership positions in the technology industry are held by women.

How can we get more women into technology? Why do you think there is a lack of women in technology?

SM: I think it needs to start early – give girls a Raspberry Pi, teach them Scratch, show them that those careers are open to them. I think schools play a big part in the aspirations of young girls and women. When I was 16 and doing Physics GCSE we covered electricity and circuitry. I really enjoyed that module but when I expressed an interest in becoming an electrician my Physics teacher shut down the idea because of my gender. Just like that I was put off doing anything that was “suitable for women”. I think that schools have a huge role to play in encouraging women to think beyond the sorts of roles they would see in their day-to-day life.

“It needs to start early – give girls a Raspberry Pi, teach them Scratch, show them that those careers are open to them.”

SS: We must start the thought process from a young age – let’s show how amazing technology is to young girls; let’s get girls playing on computers and with robots. Schools should be teaching girls in their IT lessons how many jobs there are for us in Tech. Young girls look up to older girls as role models, and the women working in tech today have a huge responsibility to speak up and make the change happen.

What advice would you give to a woman considering a career in the tech industry? And what do you wish you had known?

SM: I wish I’d known what my options were following my experience at school. That said, I wouldn’t change the career I’ve had to get to this point. Working in the IT team is honestly a dream role!

JM: I would encourage anybody considering a career in technology to pursue a role which aligns with their skills and interests, and not to be held back by doubts over typical gender-based stereotypes. Be confident in your abilities and don’t let anybody limit your potential!

SS: No matter what industry you are in, there will always be people who aren’t forward thinking, who do not like change, and who will not be welcoming to women. We should not accept this, we should challenge it! Things won’t change unless we stand up for ourselves and show that we are just as good as the men standing next to us. If you are a woman considering a career in the tech industry, I honestly believe you should take the plunge.