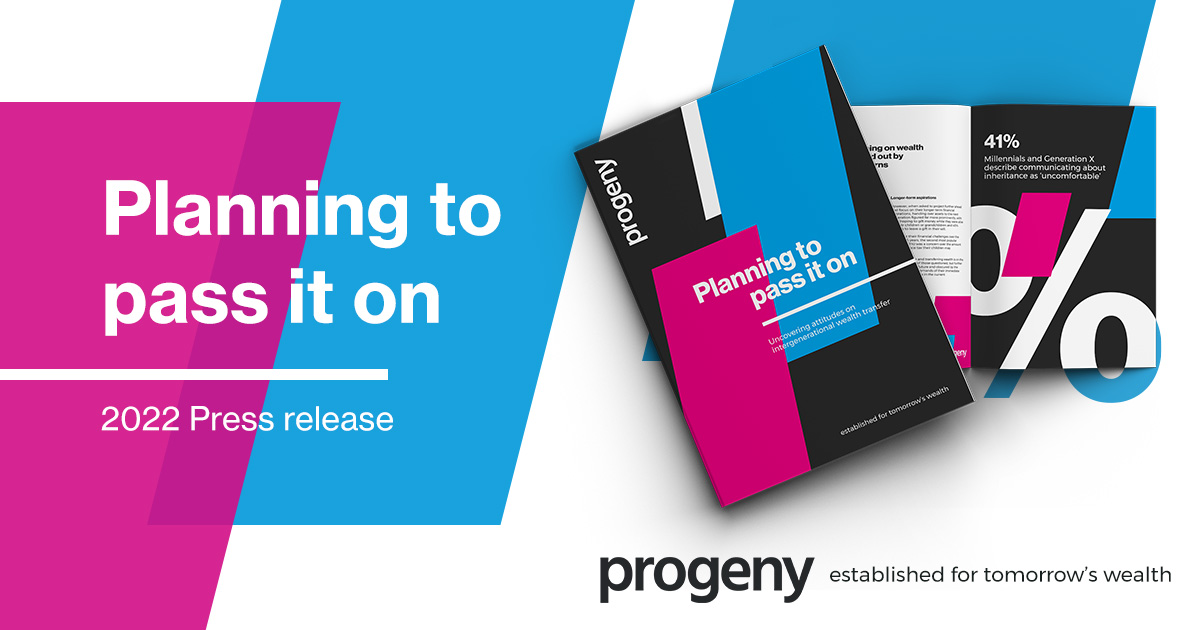 1-in-4 Baby Boomers don’t trust the younger generation to use their inheritance wisely, according to a national survey by professional services firm, Progeny.

Additionally, nearly half (48%) of Baby Boomers say the attitudes and priorities of younger generations affect their decision-making around transferring wealth to the next generation.

The research report – Planning to pass it on – conducted by YouGov for Progeny, aimed to uncover national attitudes around intergenerational wealth transfer, either through leaving money as an inheritance or gifting it during their lifetime, and polled three generations for their views.

The majority of respondents said they intend to pass on something to the next generations of their family, with 60% planning to do so.

However, of those aiming to provide financial support or inheritance to loved ones, the majority questioned (49%) didn’t know, beyond that, how they might do it.

25% said they only had a rough idea of details, like who the beneficiaries would be and the amounts they would give them.

Only 17% of those who said they are planning on providing financial support or inheritance to their loved ones reported having a formal plan in place to hand over money to the next generation and only 3% said they had worked with a financial adviser on this.

Fewer than half of (47%) Baby Boomers were confident about making plans or taking financial decisions about transferring wealth, and a third (32%) said they were not confident.

Around the same proportion of Generation X and Millennials (45%) were confident about making use of any received inheritance, versus 39% who said they were not confident.

One-fifth of respondents stated that they didn’t want to pass on a significant sum of money to their loved ones and nearly half of those questioned (49%) felt it was more important to use their money to enjoy life to the full than to leave an inheritance.

The difficulty of communicating on such a sensitive topic was a consistent theme in the research. The majority of Millennials and Generation X (41%) found it ‘uncomfortable’ to discuss inheritance and wealth transfer with their parents.

When those who found it uncomfortable were asked what would make it easier, by far the biggest proportion (67%) said ‘nothing, it will always be difficult’.

Only 58% of Baby Boomers said they have discussed inheritance or gifting with loved ones, leaving 42% who had yet to do so. Of those who hadn’t had the conversation, 37%  said they don’t ever envisage discussing this with their loved ones.

Even amongst those who did expect to one day talk about passing on money to the generations below, the majority (53%) said they wouldn’t tell the beneficiaries the amount they will be receiving and over half (52%) would not be telling them when they would receive it.

Amongst those expecting to receive an inheritance, when asked how they were planning to use this money, the most popular answers were to build their savings pot (35%), fund retirement (29%) or pay off their mortgage (25%).

1-in-10 said they intended to use it to leave a further financial gift in their will for their family.

Nearly two-fifths (38%) of those expecting to receive an inheritance did not know the amount they would be receiving.

When the asked if they factor the amount of any expected inheritance or gift into their own financial plans, only 19% said they had, while 68% said they had not.

When asked to rank their top current financial goals, only 6% of respondents identified inheritance and estate planning as an important aim for them.

However, when asked to focus on their longer-term financial aspirations, intergenerational wealth transfer figured far more prominently, with 46% hoping to gift money while they were alive to their children or grandchildren and 45% aiming to leave a gift in their will.

Amongst their financial challenges over the next 10-15 years, the second most popular answer (30%) was a concern over the amount of Inheritance tax their children may have to pay.

There was clear evidence of the impact of the cost-of-living crisis in the immediate financial goals of the survey respondents.

The highest proportion (45%) said that ensuring they meet regular financial commitments was their top financial goal, followed by 35% who wanted to have enough cash in case of emergencies and 29% who were focused on saving enough to enjoy retirement.

At the top of their list of financial concerns or challenges was the increase in the cost of living (59%), followed by their anxieties over not saving enough (43%) and not having enough for emergencies (39%).

Perhaps understandably, more Millennials were concerned about an increase in daily living costs than the other generations – 78%, compared to 59% of Gen X and 41% of Baby Boomers.

More broadly speaking, the general financial anxiety of the younger generations was clearly evident in some of the results. For example, the larger proportion of both Millennials and Generation X did not believe they would be able to take care of their retirement and care needs without their money running out.

Neil Moles, CEO of Progeny, said: “This research has given us an illuminating snapshot of national attitudes towards inheritance and intergenerational wealth transfer today.

“Transferring money to the next generation is an ambition for many, yet there is a stark lack of any structured planning in evidence. This creates risk and missed opportunities for those on both sides of the wealth transfer.

“A unique set of economic circumstances have helped the Baby Boomer generation to build up significant levels of wealth compared with the generations that went before them.

“In the years ahead, we will see more families having more complex requirements when it comes to passing on their wealth to the next generation.

“Some may be the first generation of their families to need to plan for intergenerational wealth transfer or prepare for considerations like Inheritance Tax.

“Addressing the issue as a family is likely to lead to better outcomes for everyone. Creating a joined-up, coordinated plan for giving and receiving an inheritance will help the older generation to pass on wealth effectively when the time comes and ensure today’s younger generations have something to pass on in future.”

All figures, unless otherwise stated, are from YouGov Plc.  Total sample size was 1004 adults. Fieldwork was undertaken between 12th – 18th August 2022.  The survey was carried out online. The figures have been weighted and are representative of GB adults aged 24 – 74.

Progeny is the first and only firm in the UK to bring together independent financial planning, asset management, tax, HR and private and corporate legal services.