My Six-day Journey Through the Sahara, and Why Succession Planning is a Multi-Day Marathon, Not a Sprint! – Part 1 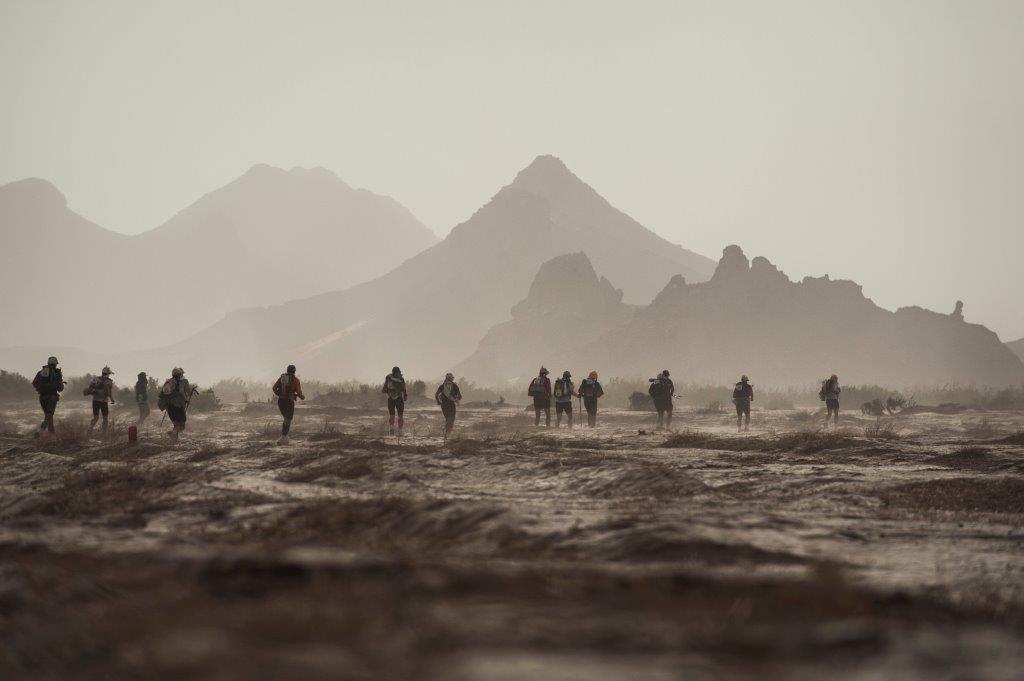 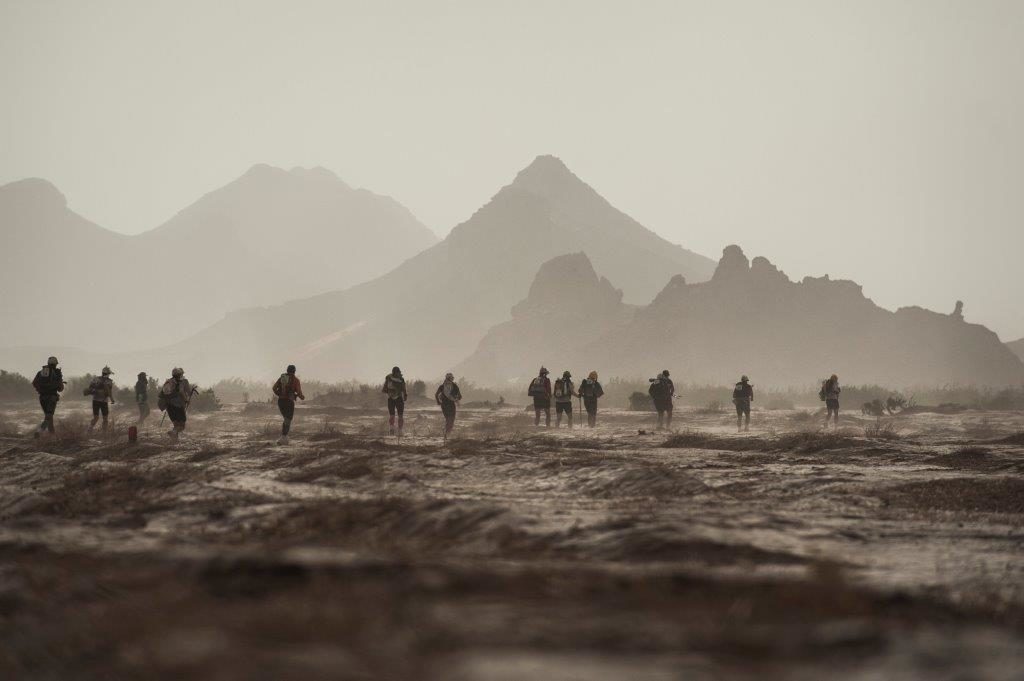 It’s said that the Marathon des Sables (MdS) is the toughest footrace on earth. A 156-mile race over six days through the Sahara Desert in temperatures of up to 50°C would certainly suggest as much. So, it was with a mixture of excitement and trepidation that me and almost 1,000 others found ourselves lining up at the start of the race last month. Having rowed across the Atlantic Ocean in 2016, I was now ready for a new challenge.

In this two-part article, firstly I’m going to talk about my experience of the race itself. In the second part (now live here!) I’ll go on to look at the parallels between competing in an event like this and the work we do to help families and businesses with succession planning and minimising the impact of Inheritance Tax on their wealth. But for now, back to the Sahara… 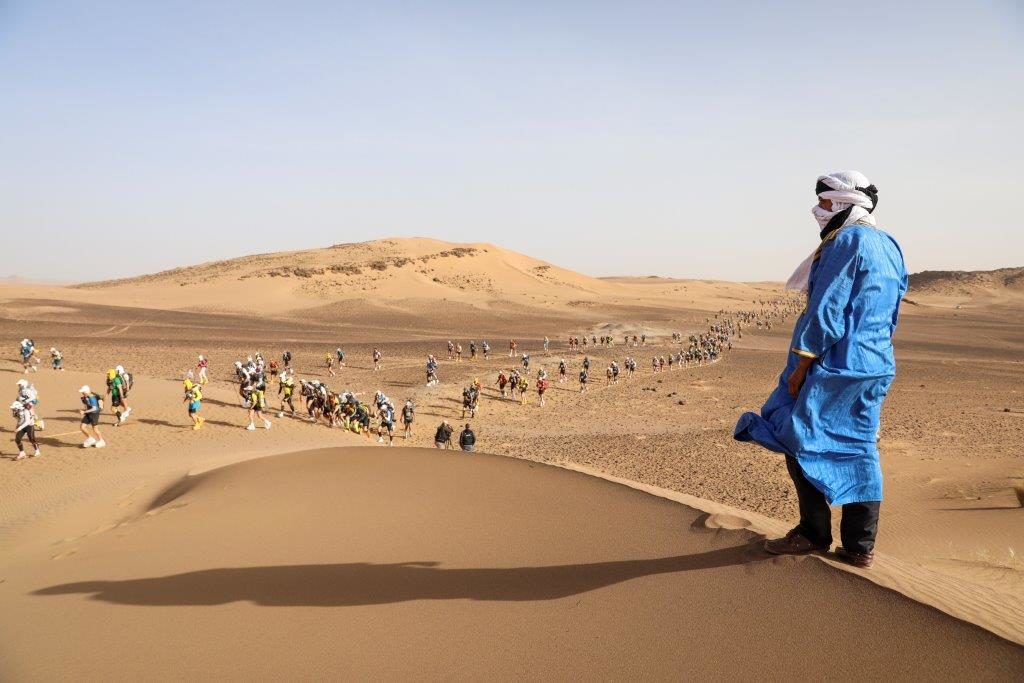 The British contingent flew out the day before the race on a charter flight from Gatwick to Ouarzazate in Southern Morocco. Everyone onboard was taking part and most were in their full race kit having heard scare stories about luggage going missing – and in fact one woman did lose all her hold luggage on the flight. Hand luggage was a rucksack that contained the week’s food and other essential equipment. Other than your water ration and the bivouacs you sleep under, you have to carry all your equipment with you through the race. This includes at least 2000 calories of food per day for seven days, a headtorch with spare batteries, and an anti-venom pump for snake bites… amongst other basics like a blister kit, compass, knife and sleeping bag.

On arrival in Morocco, a six-hour bus ride into the desert transferred us to the first bivouac, the starting point of the race. Me, my friends and assorted friends-of-friends were in tent 99 – this would be our family for the week. We were fed for one day, but from then on would become self-sufficient – from the Sunday start until the following Saturday afternoon. 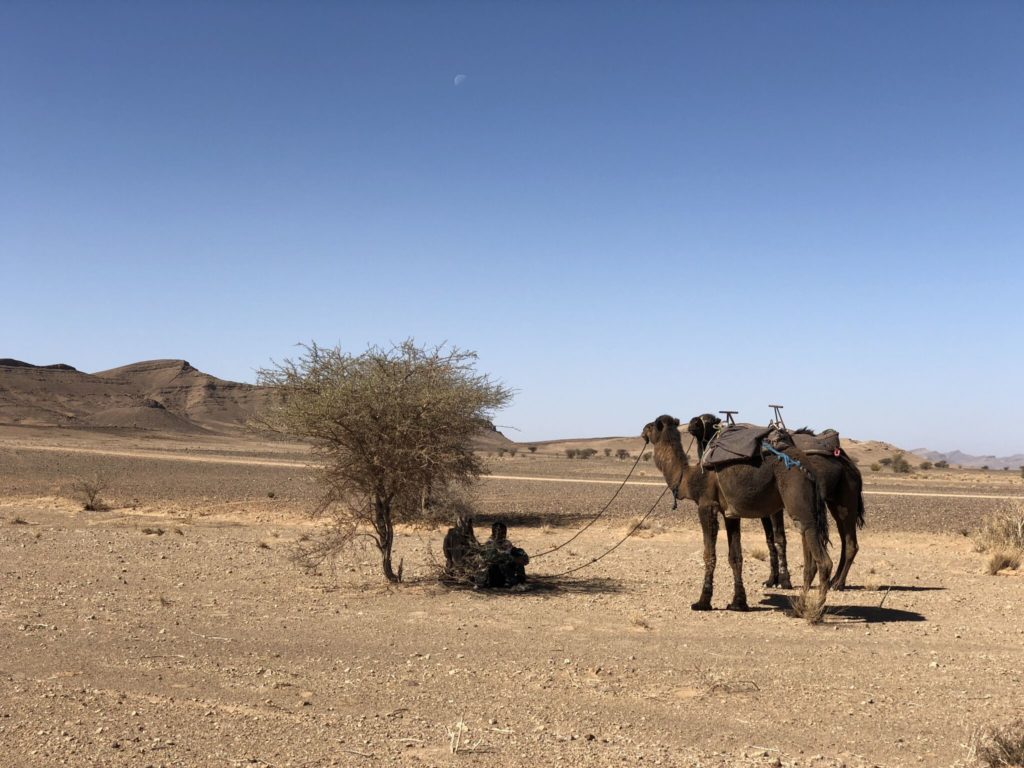 I signed up for the race almost two years ago and had been training hard for well over a year. I’d done three 2-3 day ultra-events in England as part of my training but for those I’d only needed to carry a day bag and the temperatures there did not exactly mirror what I would experience in Morocco. Running with a bag weighing 1-2 Kg is also very different to one which (at the beginning of the week at least) weighed over 10Kg. My biggest fear was that my feet wouldn’t last the week. A quick Google search for foot damage in the desert will certainly put you off your dinner!

Typically, between 5 and 10 percent of runners do not finish. Whilst I appreciated the fact that finishing isn’t a foregone conclusion, I really did not want to be part of the ‘DNF’ statistics. 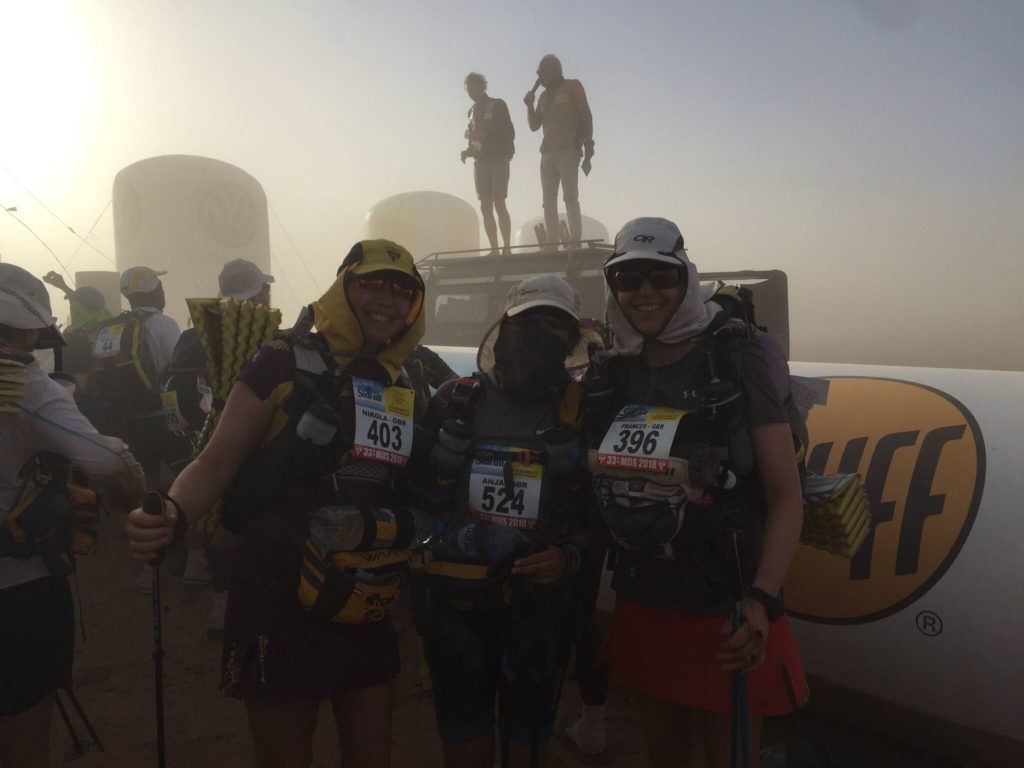 Each day in camp began at 5am with the sounds of other people rising and chatting. The bivouacs were dismantled whilst we were still under them and each race stage began somewhere between 7am and 8.30am – the higher the temperature, the earlier the start. Every stage started with a briefing from the legendary Frenchman Patrick Bauer, the founder of the MdS and the man who was the first to run across the Sahara. Then, Patrick and his English translator danced away on the roof of a Land Rover to a loud rendition of AC/DC’s ‘Highway to Hell’ as we set off into the desert.

There are check points every 10km or so where you receive extra water bottles and can rest briefly, eat something and have a medic from the Doc Trotter team examine the state of your feet. Everyone is issued with a race tracker, so the organisers know immediately if you’ve gone off-course. The route is marked, but your roadbook is also essential for navigation. There is a time cut-off point for every stage. Moving at around 2.5 miles an hour should enable you to finish within this and the organisers are generous with it as long as you appear fit and well. Two camels bring up the rear, so in theory you just have to keep ahead of them!

Evenings (and afternoons for the faster competitors) are spent eating, resting and dealing with foot issues. Also, every evening the postman came knocking – delivering emails from friends and family. These can be either brutally funny or very emotional depending largely on the mood of the recipient. 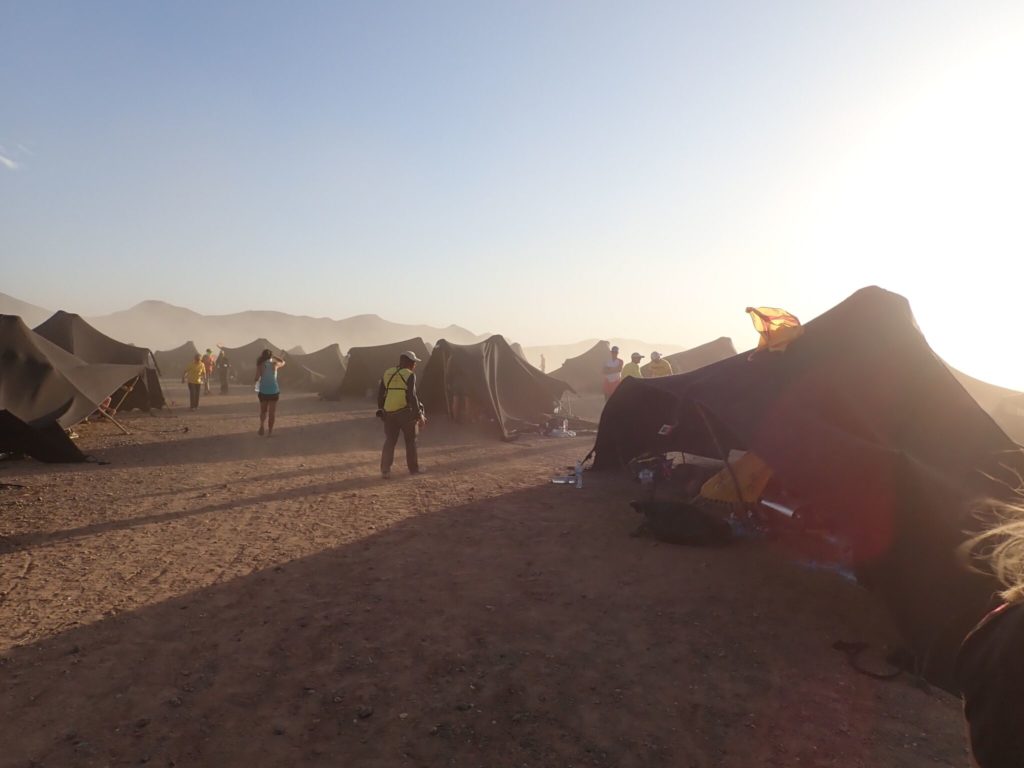 Camp life is everything. Having a good set of tentmates can make or break a week. In Tent 99 we were all very supportive of each other. Of course, there was still ‘banter’ but the underlying aim for our week was to try to make sure that we all finished. And the bivouacs were so snug – just enough room for eight sleeping bags lying side by side – that it was vital that we all got along!

Tents are roughly organised by nationality – partly to avoid any language problems. There were 50 different countries represented, the largest contingents being from France and the UK. All race numbers had first names and nationalities on so it was easy to strike up a friendly conversation out on the course. 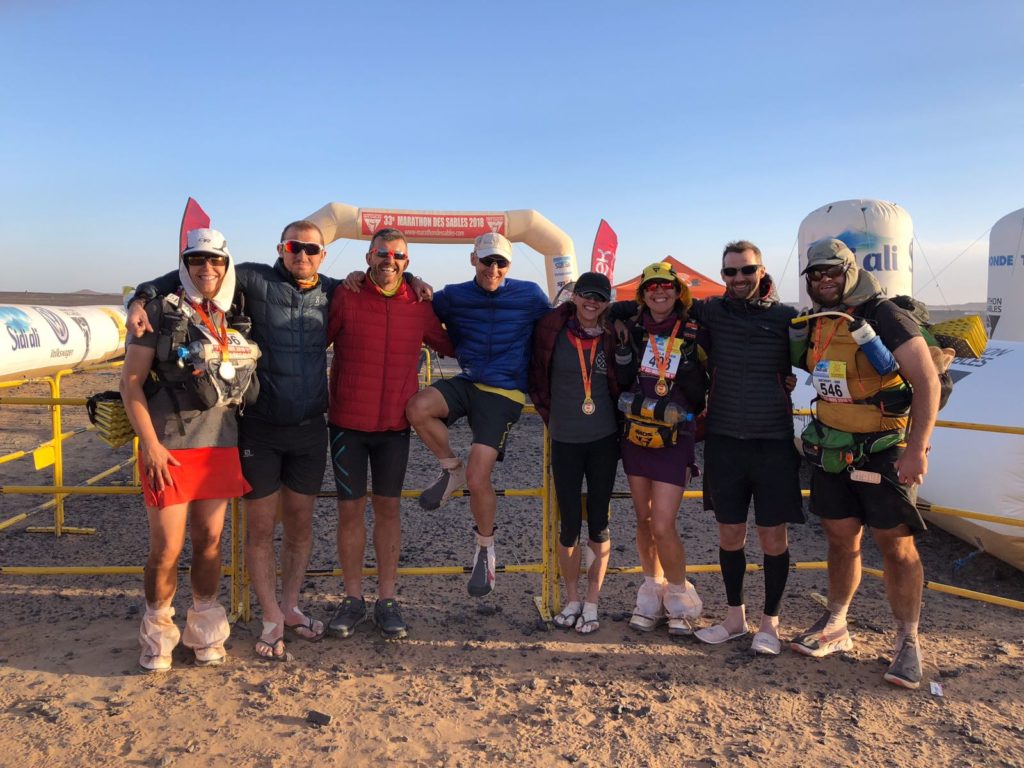 Strong friendships were forged in the heat and exhaustion of the desert. We were very much a mixed ability tent, but my friend Niki and I had decided beforehand that we would walk the whole thing which meant we were almost always the last ones in our tent to finish. Every day our faster tentmates were there at the finish to greet us and to help carry our bags which was a tremendous welcome to return to after each gruelling stage.

The race stages varied in length from a relatively easy 30km stage on Day 1 to the much-anticipated long stage 4, which this year was 86.2km. For the faster runners this involved a night-time finish followed by a rest day – for the walkers it’s an all-nighter which is not followed by a rest day! The long stage took me almost 30 hours – I finished at around 2pm on the second day having had just a couple of hours sleep at a check point between 2am and 4am. We also made a new ‘friend for life’ on this stage.  We’d already seen Anja many times as she was a similar speed to us and was in Tent 100, next door. She almost dropped out during the first day of stage 4 but was persuaded to carry on by one of the support team. She then teamed up with us and we spent one of the most memorable nights of our lives together.

We navigated through the dark by following the glowsticks sparsely placed along the course. It was a surreal night of scanning the horizon for the faint evidence of a distant glowstick and aiming for it with only our headtorches to illuminate the immediate way ahead. From time to time we turned our torches off and just looked up at the stars – the night sky without light pollution is an awe-inspiring sight! 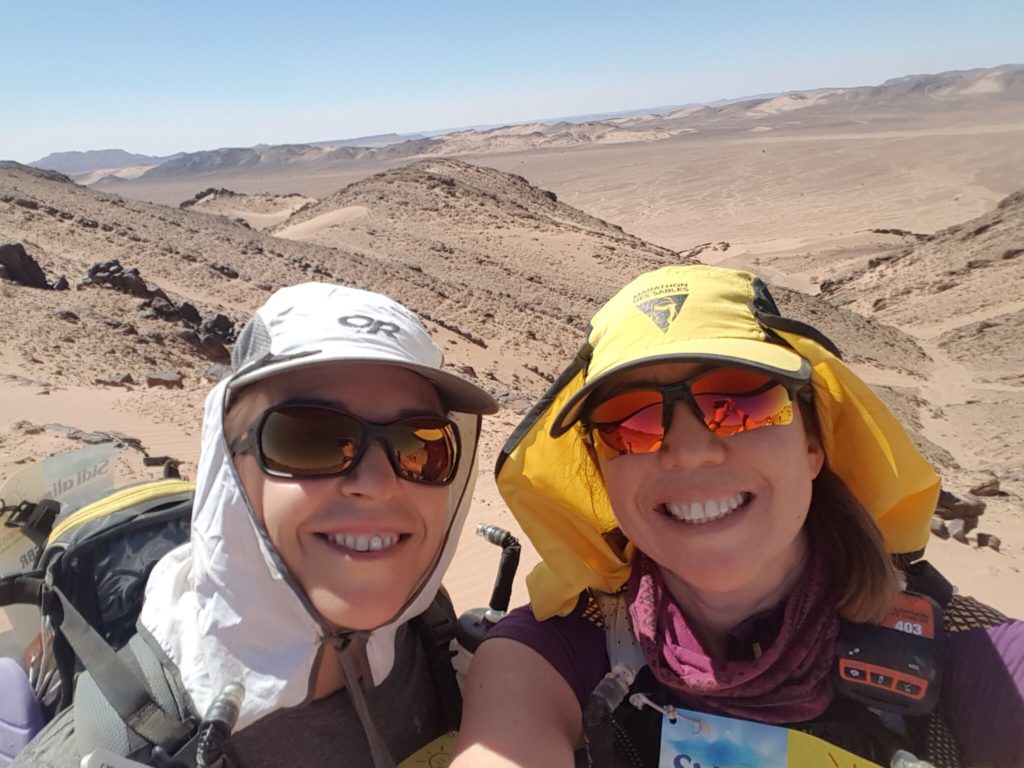 That night was just one of many life-long memories that were created over that intense and unforgettable week in the Sahara. I made a whole group of new friends and gained a greater and more grateful sense of the brutal beauty of the world we live in. About 60 people didn’t finish this year’s race, but after plenty of highs, lows, laughs and tears throughout the week, I’m delighted to say that all the occupants of Tent 99 made it over that finishing line to receive our medals from Patrick. We felt privileged to have experienced and survived that environment for a week and proud for conquering a challenge that no one can ever know if they’ll rise to until they do it – for me, the most satisfying achievement of all.

We were raising money for the Maggie’s charity and have reached over £5,000 so far. Any further contributions would be gratefully received to our JustGiving page.

Next month I’ll look at the parallels between planning for a successful multi-stage marathon and planning to preserve wealth across the generations of your family. 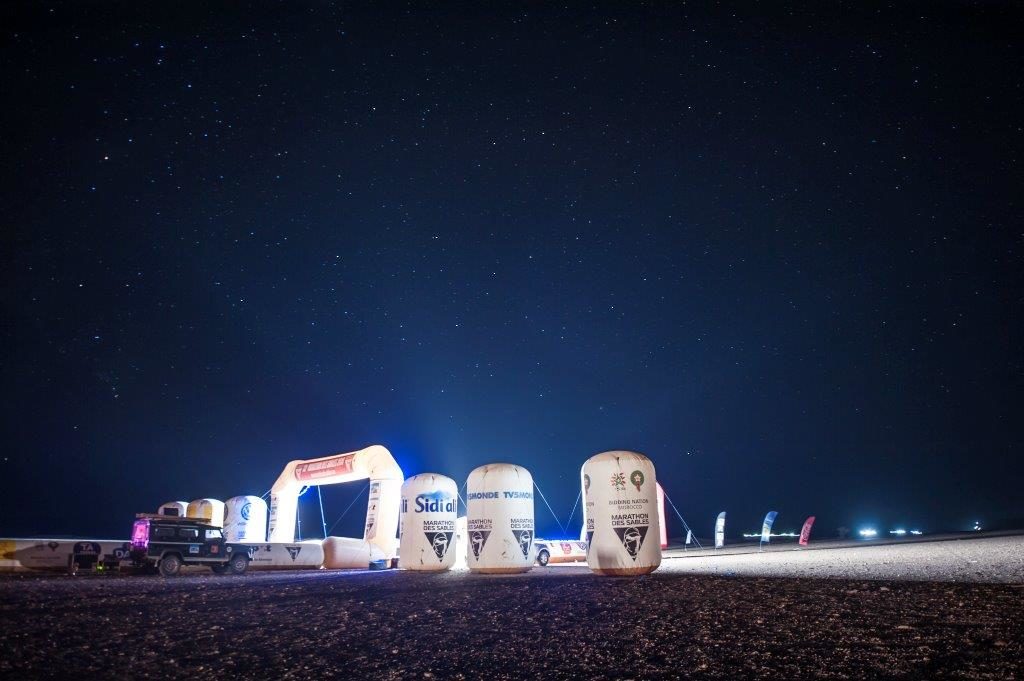